This Class continues to honor more of the players from the 1960’s who helped to originate and lead the initial years of the program; and the first team from 1962 which "Started it All".   All of the individuals were known to have excelled on the field, and it is their on-field talent, coupled with their contribution to the team’s origin that adds to their legacy as Hall of Famers.

Phil Bodenhorn (1966-68), Midfield, Captain, Most Outstanding Player 1967. Phil played several positions on the 1966 varsity lacrosse team, coached by Carl Runk. In high school, he was a multi-sport athlete and two-time Arizona High School Champion Decathlete. At Arizona, he picked up a lacrosse stick with dorm mates who were playing on the WCLA Conference Champion Arizona Lacrosse Club Team and was encouraged to join because “…we can always use a player who can run.” Phil participated in team activities in 1966, initially as a defensive midfielder.  As his off-hand finally came around, he carved out a more offensive role and focused on becoming a face-off and fast-break specialist.   In 1967, he was voted Team Captain and led the team in scoring and defensive takeaways and garnered First Team Midfield consideration as a WCLA All Star, as well as Most Outstanding Player for the year. He graduated as a University Freeman Medalist and served a 26-year career as a commissioned officer in the United States Army Special Forces. After his retirement from the Army, he served as an Intelligence Supervisor in the Federal Bureau of Investigation. Throughout his career, he maintained involvement in the sport—coaching both high school and college lacrosse programs and seeing his son Brad become an attackman at Denison University and son Greg an All-American defenseman at Duke University. Philip lives in Carlsbad, California with his wife Karen.

James Bruner (1964-1966) Defense. Co-Captain, 1965 Championship team.   Jim grew up in Dayton, Ohio and started college at Northern Arizona University.  He transferred to UofA and was introduced to lacrosse by Dave Handschumacher (UofA Hall of Fame 2021) and Jay Lehr (UofA Hall of Fame  2019) who he met in a Hydrology class.  Jim worked on ships for the Navy for several years based out of Maryland in 1969-1971, then returned to Southern California and taught High School physics and geology, and coached football.  He traveled throughout Pacific, Middle East, South Asia , Nepal, Tibet, Afghanistan, North African and Europe on a 15 month sabbatical and “got lucky” with his first marriage in 1989. Jim has one wonderful daughter, born in 1989, and retired after 42 years of teaching in 2008, and lives in Long Beach, CA.

Dave Clarke (60-64). Dave is credited as one of those who was at the forefront of the origin of Arizona lacrosse.  Dave is noted as a native of New England, who played at Boston University.  Upon relocating to Tucson, Clarke introduced Cooper to McChesney, Lehr and Golos, and this group of five soon became the core movement to create a lacrosse team at the University of Arizona. Dave was the Director of Community Ministry at St. Bartholomew’s Episcopal Church in Manhattan, NY for many years, and a Deacon for over 40 years. 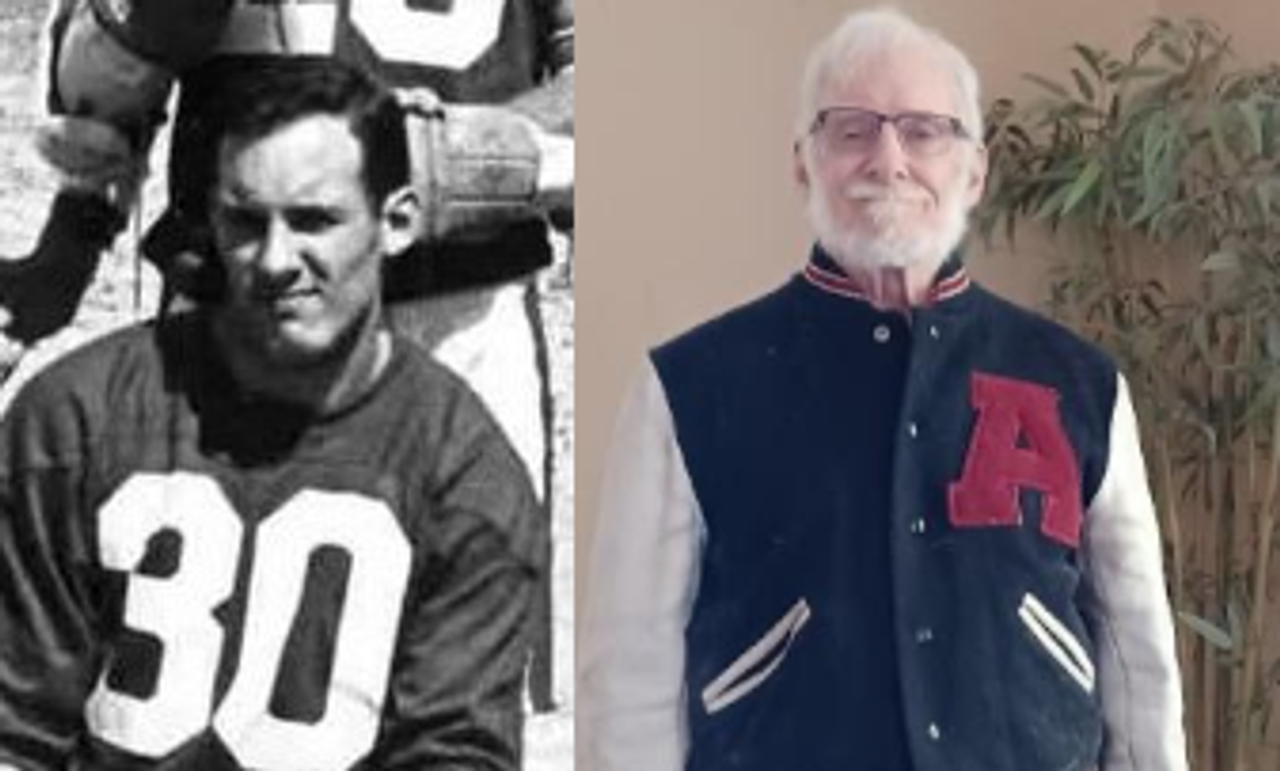 Cody Copeland (1963-1965)  Midfield, 1963 First team All-Star, 1964 Most Outstanding Player, 1964 WCLA First team All-Star. 1965 Championship team. Cody grew up on Long Island, NY, graduating from Mineola High School in Garden City Park in 1960.   He played lacrosse in high school.  After high school he elected to join the Marines, but decided to defer military service until after college.   Through a connection of his father’s, Cody ended up at the University of Arizona.  As a lacrosse player at UofA he was known as one of the most productive midfielders in Arizona history, as well as one of the nation’s top goal scorers in 1963.  He was in the ROTC program for 4 years at UofA, and after graduation from UofA in January 1966, he was commissioned a second lieutenant in the US Air Force, and went on active duty with the job to launch Minuteman ICBM (intercontinental ballistic missiles) in case of war. He served in the Air Force until January of 1970.  He then obtained a Master's Degree in Education at the University of Wyoming and worked as an educator until his retirement in 2014.  He is also a licensed multi-engine pilot and flight instructor.

Dave Handschumacher (1964-1966) Attack, Captain, 1965 Championship team. Most Outstanding Player 1966, USILA North-South All Star Game 1966. Introduced to lacrosse by Howard "Mac" Fish (Princeton All American, 1952), Dave played on the first "west of the Mississippi" varsity high school lacrosse team at the Webb School of California from 1958-1962. He was Captain, MVP and leading scorer for Webb in 1962, and a two-year CLA All-Star Team selection, as well as the Helms Athletic Foundation Award for California’s most outstanding high-school lacrosse player.  He was then Captain, leading scorer and MVP for Union College's (NY) 1963 Freshman Team, under legendary head coach Bruce Allison (USA Lacrosse Hall of Fame 2011) When told that he would be moving to goalie, Dave transferred to Arizona where he met Bob Kasten (UofA Hall of Fame 2019).  With renewed passion for the sport, Dave joined this team, coached by Jay Lehr (Princeton, All American'57) for the 1964 season. In 1965, The Athletic Department under the insightful and enthusiastic leadership of Athletic Director Dick Clausen elevated the team's status from club to D1 Varsity, making Arizona the First college west of the Mississippi to establish a varsity lacrosse program; and Dave became a cornerstone of Arizona’s 1965 (Hall of Fame 2019) undefeated WCLA League Championship team as captain and leading scorer, as well as a three-year WCLA First Team Attack selection. In 1966, Dave had the distinction of being the first Western player ever selected to play in the USILA North-South All-Star Lacrosse Game in Baltimore, MD.

Following his time in Arizona, Dave lived in New Orleans where he continued to play club lacrosse for Tulane and the New Orleans Lacrosse Club until 2005, winning “Oldest Player” award in 2005. This activity was suspended in 2009, resulting from the destruction of his home in Hurricane Katrina.   Dave currently resides in Mazatlán, Mexico where he works with rescued dogs at his home and at the Hope Animal Sanctuary. He has two daughters; Lisa with Dave's first grandson, Santi, in Tokyo and Laura in San Diego .
VIEW DAVE HANDSHUMACHER'S COLLECTION OF ARTICLES AND PHOTOS FROM 1964-1966

Richard Orville (1962-1964)  Most Outstanding Player 1962. Richard "Dick" Orville received his undergraduate degree in Physics from Princeton and came west to the University of Arizona to study for his doctorate degree in Atmospheric Physics & Dynamics.  Dick quickly fell in with the other east coast men who were building the lacrosse team in Tucson.  He was a welcome addition to the program and was named the team's first Most Outstanding Player in 1962.  After receiving his doctorate degree from Arizona, Dick went on to work as a professor for 23 years at the University of Albany before moving to College Station, Texas where he served as a professor at Texas A&M University until his retirement. Dick currently lives in College Station, TX with his wife Barbara, who he met and married in Tucson in 1964.

Neil Stroman (1962-1965), Defense, Most Outstanding Player 1965, 1965 Championship team. Neil grew up in Buffalo, NY and chose to leave the harsh upstate New York winters to sunny Arizona for college.  He had never even seen a lacrosse game until he played in one at the University of Arizona. He saw a flyer for a new lacrosse club on campus early in his freshman year and decided to give it a try.  Having a defensive-minded temperament and no experience with a lacrosse stick, he became a defenseman.  Neil had always played team sports and loved being a part of a team, and it helped that it was convenient – the practice field was right behind his fraternity house.

After graduation, Neil headed back east and attended George Washington University for his MBA in Hospital Administration.  While at GWU, he ran into a fellow defenseman from the U of A, and joined him on defense for a few games with the GW club lacrosse team.  During his final year at GWU he moved to Boston for his Administrative Residency and played for the Boston Lacrosse Club.

After graduating from GWU in 1969, Neil spent the next two years on active duty as a Medical Service Corps officer in the Army, where he met his wife, an Army nurse, and included one year in Vietnam.  Once his ROTC commitment was fulfilled, Neil entered the Army Reserves and pursued his career in hospital administration in the Boston, MA area, with a few brief assignments up and down the east coast.  While living in Boston, he played for the Commonwealth Lacrosse Club for eight years, matching up against local colleges and participating in the Boston Summer League.  Neil returned to upstate New York for the last 10 years of his hospital administration career, serving as the President of two rural hospitals located between Rochester and Syracuse.

Neil and his wife, Mary Ann have three children – two sons and a daughter, and live in the Richmond, VA area.  He has five grandchildren, and lives close enough to regularly play catch with the four (two boys and two girls) who play lacrosse – with his wooden stick of course!

The 1962 Team.  "The Team that Started it All." Organized by 2019 Hall of Famers Chuck McChesney, Jay Lehr and Don Golos, and Coached by Carl Runk (UAL-HOF 2019); this Original squad played the First game of lacrosse representing the University of Arizona on March 24, 1962; suffering a 5-3 loss to the lacrosse club from Claremont College.  At the end of the season, they finished with a 4-6 record, including two wins against the reigning California Lacrosse League champion San Marino lacrosse club. Other opponents included The Phoenix Lacrosse Club, University of Colorado, Denver Lacrosse Club, and the Air Force Academy.  This team set the stage for what would become a Varsity program in 1964.  Other UofA Lacrosse Hall of Famers who played on this team are Willy Cooper and Bob Kasten (2019), and Cody Copeland and Neil Stroman (2022).